I’ve had a slight obsession with sandwiches lately. Could be because of all the bread I’ve been baking since late last Spring… we need some way of eating it without feeling guilty… but I think it all started a few years ago when the husband and I stayed at the MGM Grande in Vegas. We shacked up for a few days with the eldest baby–we only had one at that time–in a suite in the condo towers behind the casino. The towers and casino were connected by an enclosed walk-way and a few steps away from the doors of said walk-way on the casino side there lived a ‘wichcraft of Tom Colicchio fame. We grabbed a sandwich-to-go every day of our stay, and I am now convinced that this trip got the wheels a’turnin’.

I do believe this is the very sandwich that pushed the thoughts into action.

And here is my latest offering for sandwich night, now a weekly dinner event around our table. 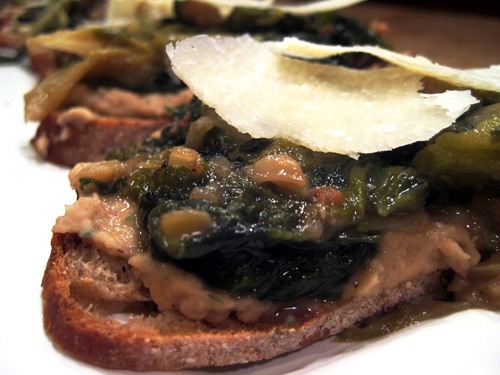 and a little bit of parmesan.

I was _really_ hoping to have some pictures to go along with this post, but the camera’s battery is dead, and I can not for the life of me find the charger. I’m getting a little worried about that, since we’re leaving for vacation at 4 am on Saturday, that is, if Hanna doesn’t force us to evacuate–or not even visit–Hatteras Island, where we’re planning on spending the week.

But it was an incredibly busy day none-the-less. I baked six loaves of Ciabatta, I made a double recipe of Spuma do Tonno, pureed and strained a gallon of Creamy Tomato-Basil Soup, set nine pound of peaches in the crock pot for peach butter, and managed to keep the kitchen passably clean the entire time. Actually, now that I have it all listed, it doesn’t sound like that much. But it was. And I’m tired. And I still need to take one more pass at the kitchen before I’ll feel OK about going to bed. But, oh, I’m sitting now, and it’s so hard to even think about getting up.

Tomorrow: packing, packing packing… oh, that is after laundry, laundry, laundry. Hurricane be damned. I’ll stay in a Motel Six somewhere in Kentucky, but I’m going on vacation for a week, and I’m bringing my own food and I’ll have clean clothes!

One of the things I like most about my blog title is that I’ve kept it open to all endeavors in which I occasionally dabble in obsessively, not only knitting. Of course, the subject of the majority of the entries will remain firmly in the realm of knits and purls; after all I do have an ever increasing stash that needs working through. But I hope to more frequently write up a little about what goes on in my kitchen as I manage to spend quite a bit of my day there. Often I find myself wishing there was even more time and energy available to cook up another dreamy recipe or two… and an instant-extend-a-nap button.

This summer I’m spending some time learning how bake bread, something I’ve always had a fascination with that has only deepened the longer we spend time here in this city with it dearth of good and/or readily available bread. I have now almost conquered ciabatta–still have a few issues every now and then–and I’ve found a grilled flatbread recipe which brings me great joy, as well as yummy dinners. So far we’ve used it to dip into a lovely herbed oil, topped it with sauteed zuchinni with lots of garlic and plenty of lemon peel, or covered it with red ripe heirloom tomatoes my dad brought up from the South.

But my favorite so far was last night’s dinner when I took some very bland, cardboard-y tomatoes, de-seeded the chopped them up and threw it all in a pan with some beautiful olive oil, a clove or two of local garlic, salt, pepper, and a whole mess of saffron letting it cook nice and slow until the tomatoes found the sweetness they had buried deep inside. After I took the bread of the grill, I slathered some labne–a drained yogurt–stirred in a few drops of sherry vinegar into the tomatoes then dropped it by the spoonful onto the bread. 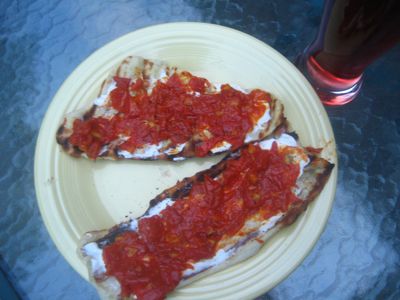 It was a rather yummy way to put the day to rest. The herbal sun tea was a perfect little drink to go along with it.

I cooked the tomatoes a little too unkindly in the first few minutes, so they fell apart into a mess, but if you have more patience and take your time with low temperatures, the tomatoes will keep their shape rather well.

But as soon as those local ripe tomatoes start rolling in, I’ll kiss my pan, put it back in the cabinet, and never give it a second thought until September.

Unless, of course, there’s bacon.